Zarzaur Law Crash Report: The Most Dangerous Times on the Road 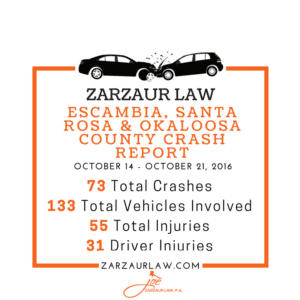 The odds of getting into a driving accident increase during periods when there are more cars on the road, such as rush hour, or when driving conditions are less than optimal, as during periods of inclement weather. But when the number of alcohol-impaired drivers increases, the odds skyrocket. Research into periods when motorists are most vulnerable to accidents involving alcohol-impaired drivers offers an instructive road map for avoiding those times when driving risks are the greatest.

Car Accident Lawyer, Joe Zarzaur of Pensacola Law Firm Zarzaur Law P.A. can assist you or your loved ones if they are involved in a Pensacola car accident.

According to National Highway Traffic Safety Administration (NHTSA), between 2001 and 2005, 36 fatalities occurred per day on average in the United States as a result of crashes involving an alcohol-impaired driver. At certain times of the year, such as summers and holidays, those numbers rose dramatically. During the Christmas period, for example, an average of 45 fatalities involving an alcohol-impaired driver occurred each day, and soared to 54 per day over the New Year’s holiday. All these numbers would almost certainly be lower if breathalyzer use were more widespread.

The summer season usually offers the best weather and driving conditions of the year – dry roads, excellent visibility, and longer daylight hours. But the seasonal benefits can be negated by other factors. According to the NHTSA, a higher volume of holiday travelers, including a significantly higher number of alcohol-impaired drivers, cause nearly twice the number of automotive deaths during summer months than during the rest of the year combined.

The IIHS found that the second deadliest day after July 4 was September 2, followed by August 13, July 15, May 20, and November 11. Perhaps surprisingly, New Year’s Eve ranked 7th, with 130 average fatalities.

IIHS also discovered that seven of the 25 deadliest days in the U.S. occurred during August, which made it the deadliest month on the road. September and July rank as the second and third deadliest months, according to the NHTSA, and March had the fewest auto fatalities.

Many of the deadliest days occur when people celebrate special occasions and events, such as Cinco de Mayo or the Super Bowl. For example, a NHTSA study found that alcohol-related crashes claimed a life every 51 minutes on St. Patrick’s Day in 2010, accounting for 32% of all fatalities that occurred that day.

The NHTSA reports that most accidents occur during “rush hour,” between 3 p.m. and 6 p.m.  And according to the NHTSA, Saturday is the most dangerous day of the week to drive, primarily because there are more cars – and more drunk drivers – on the road than any other day. According to the AAA Foundation for Traffic Safety, 31% of fatal drunk-driving accidents occur on the weekend, and the highest number of drunk drivers is on the road between midnight and 3 a.m. Fatal crashes are also four times higher at night than during the day.

If you or someone you know has experienced a Pensacola car accident, please call a PensacolaCar Accident Lawyer at Zarzaur Law, P.A. to see if we can be of assistance.