What is the Florida’s Exchange of Driver’s Information Form? 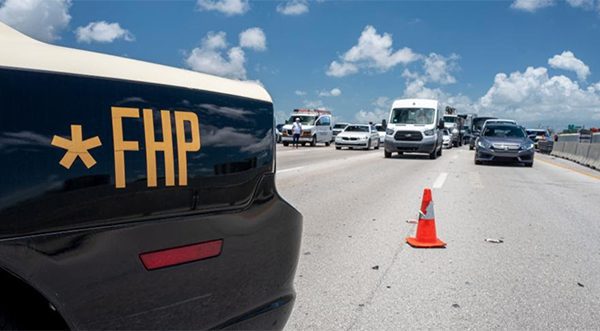 So, you are involved in a Florida motor vehicle accident and as you have found out the investigation takes a while.  The main reason it takes so much time is that Florida law requires that the State Troopers investigate every motor vehicle accident that occurs on any roadway unless there are special conditions that make a delay dangerous to others on the road.  In fact, Florida law mandates that the Department of Public Safety handle all of the wrecks that occur on public roads unless they are in a municipality.  If the wreck is within a city’s limits, then that city has jurisdiction to handle the wreck investigation and they are likely to handle such a case so long as there are no serious injuries.  If there are serious injuries or death, then many times even with wrecks within a city’s jurisdiction the Highway Patrol will be called in to investigate the crash.

Florida has basically three forms that are used in every Florida car wreck or Florida motor vehicle crash:

99% OF THE CAR CRASH INVESTIGATIONS THAT OCCUR IN FLORIDA, THERE IS A CITATION ISSUED AT THE SCENE TO THE “AT FAULT” PARTY.

Citations For “At Fault Drivers”

So, if you are cited for the crash then you will leave the scene with at least two items:

Typically, if you get a citation or if one is issued it will be for “careless driving”.  Florida Statute § 316.1925 defines careless driving as failing to drive in a manner that is careful and prudent.  This is the basic charge that the overwhelming majority of “at fault” drivers receive following a Florida motor vehicle crash.

If you leave the scene of a wreck and you are not given a citation, then you usually can assume that the other party did get the ticket.  The investigating officer will typically inform each party if fault cannot be determined.  If you do not hear anything from the officer as to who is at fault and you do not get a ticket when the officer invites you to leave, then it is likely the other party did get a citation.  The officers do not tell everyone at the scene who did and did not get cited as they are not there to hash out the validity of the citation. 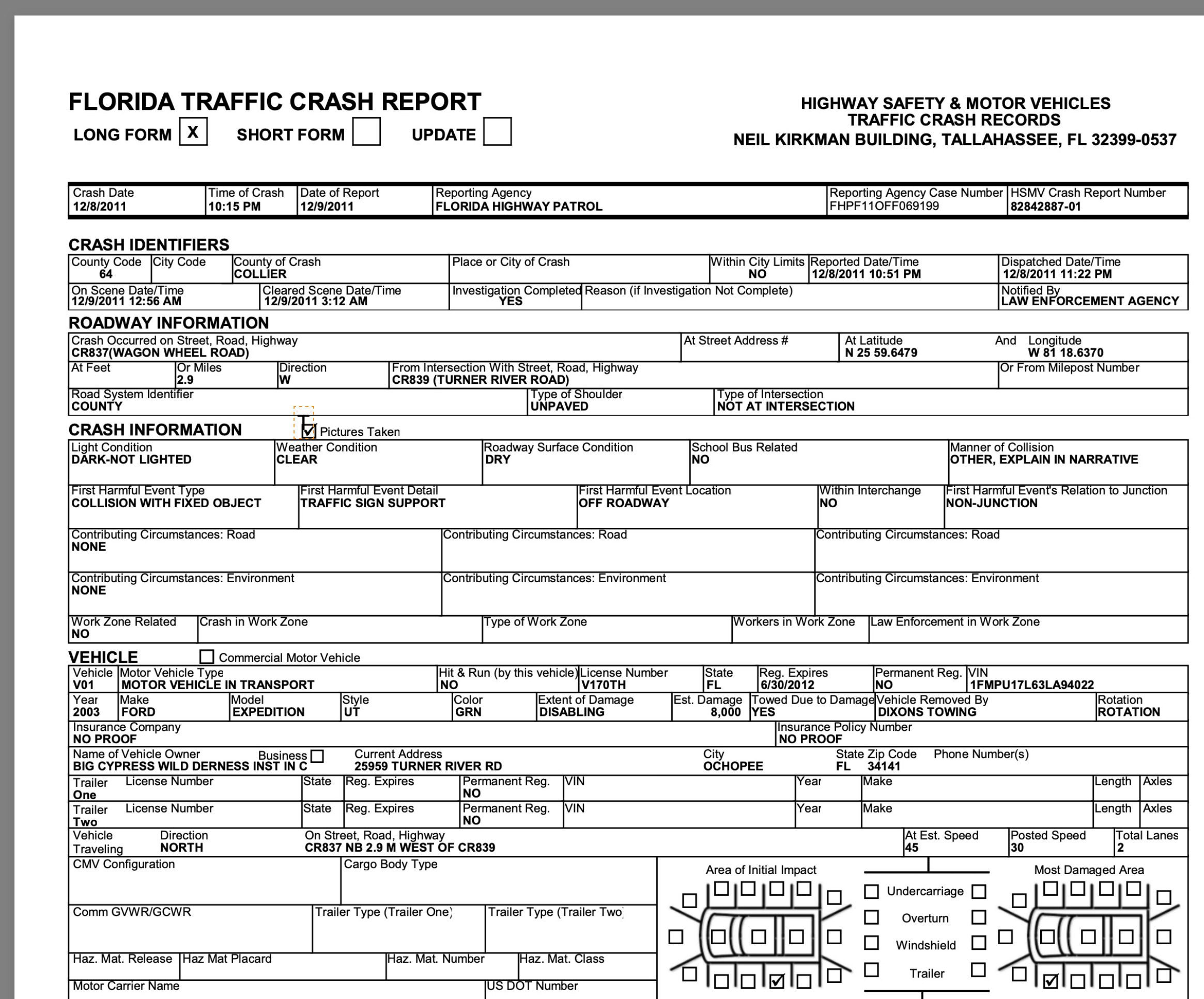 What Is The Purpose Of The Exchange Of Information Form Following A Florida Car Crash?

The purpose of the exchange of information form is for each party to have something identifying the other driver and provide information about their car insurance.  You should not take that as an invitation to call any insurance company until you have spoken to a lawyer.  See carwreckchecklist.com for more information on that issue.

When Will I Get The Full Report From The Car Wreck?
Florida law allows for the investigating officer (again typically a Florida State Trooper) 10 days from the date of the wreck to complete and make the report available.  Typically, it takes about three days.  When it is ready it can be located online and purchase for a small fee.

The full report will either be a short form or long-form report.  If it is a short form report it will usually not contain diagrams of the scene or narrative summaries from the investigating officer. Fortunately, nearly always the investigating trooper will provide the long-form which will contain his/her diagram of the accident scene and a narrative summary of how the wreck occurred.

Summary of the wreck is based on:
– Physical evidence
– Witness statements
– Statements from the parties at the scene

More and more, technology has made it possible for the investigating officer to see video of the crash.  Many businesses have security cameras that capture nearby intersections, and some drivers have dash-mounted cameras that will contain the footage from the wreck.  This will assist the officer in determining who is at fault.  Remember someone is going to get a ticket since Florida law requires that one be issued so long as the officer can determine fault.

Following A Car Wreck, What Information Does The Final Report Provide?

Where the Wreck Happened
The long-form final wreck report will provide a ton of information.  It will start with where the wreck happened.  It will usually have exact GPS coordinates and if not, it will have an approximate distance (in feet) from a particular intersection of a landmark in the roadway.  Then the report will also describe the weather and road conditions existing at the time of the car collision.

Vehicle Descriptions
The report will then describe each vehicle and the officer will assign a number to each car involved.  The abbreviations V1, V2, etc. will be used for Vehicle 1 and Vehicle 2.  By the way, nearly always Vehicle 1 “V1” is considered the “at fault” vehicle. The vehicle section will describe the model, make, and year of the vehicle.  It will have the vehicle identification number and the name and address of the vehicle owner.  This may be a different person than the driver. There is space in this section of the report for the officer to make notations as the damage to that particular vehicle and a box for the officer to denote where the damage on the vehicle is located.

Estimate of Damages
The report also asks the officer to provide an estimate as to the amount of damage to each car.  This estimate is only for use by the Department of Public Safety and has no effect whatsoever on your ability to get compensated for a higher amount for the damages to your car.  It’s basically a rough estimate just based on visual inspection.  This section usually has information about the auto insurance for this vehicle and the officer will include the name of the insurance company and the policy number.

Injuries
If there is an injury from the wreck, there is a box for the officer to provide a general description of the injury such as “serious” “minor” or “incapacitating”.  If it’s a serious injury the officer will also be able to note which ambulance service transported the person and which hospital the person was taken to.

Passenger Information
Following the driver section, there is a passenger section for use if there are any passengers in either car.  They are referred to as passenger 1 or (P1) etc. The same information about the driver is also usually recorded for each passenger.  It is important that investigating officers list all passengers since many times they pay less attention to passengers and then if a passenger has a claim for injuries and they are not listed on the report, we have to go back and request the trooper to supplement his report adding the passenger. The sooner this is remedied the better for all.

Witnesses
The next section of the report is witnesses if any.  The report will list their names and addresses and typically does not include their phone numbers but may.  If witnesses are listed that usually will mean that the officer relied upon them for his conclusion as to fault and he/she wants them on the report just in case the “at fault” party decides to contest the ticket. If there are no witnesses, then this section will usually not appear since they will use the exchange form without a witness section.

Violations
Violations is another section that will be included in nearly every report.  This box will contain the names of the people involved in this wreck that was cited and will list the exact statutes that they are being cited for violating.  This is where you will likely find D1 being cited for “careless driving” or “DUI with injuries”.

Narrative Summary
The last sections of the report include the narrative summary from the trooper as to how this wreck occurred and who was at fault for the collision.  Immediately above or below this narrative will be the trooper’s diagram showing the position of each vehicle at the time of the collision and immediately after.

Why Is All This Car Wreck Information Important And Necessary For My Potential Car Wreck Injury Case?

Well, being involved in a wreck can be a life-altering experience.  It can cause a lifetime or injury symptoms and sometimes it can kill a person.  Given this, it is important to have as much information as reasonably possible to make sure that we have a credible source of information on how the wreck occurred.  The parties involved may agree at the scene as to who is “at fault” but as soon as they leave the scene, even the most culpable parties will start rationalizing why the wreck occurred and why they really at not “at fault” for the collision.

In nearly all cases where drivers have agreed to not report the crash and no report was made, the driver that accepted fault at the scene will recant and decide that he/she wasn’t 100% at fault for the collision.  Sometimes the insurance company for the offending driver will find out that there was no report done and suggest to the “at fault” driver that maybe he/she wasn’t 100% at fault and maybe the other driver stopped suddenly or was driving too fast for the conditions and shares responsibility for the crash.

If the insurance company sees that the investigating trooper has determined that fault is with their driver, then they will likely not contest liability or fault.  The only issue that they will contest will be the severity of the injury and whether or not the amount of treatment and damages from the wreck is reasonable.   Having a Florida car wreck report with accurate information and citing the “at fault” driver for violating the law and causing the collision will remove the liability issue from the mix and will allow your lawyer and you to only fight the battle related to how much your case is worth.  This is an important issue since it removes defense from the “at fault” driver’s insurance company completely.