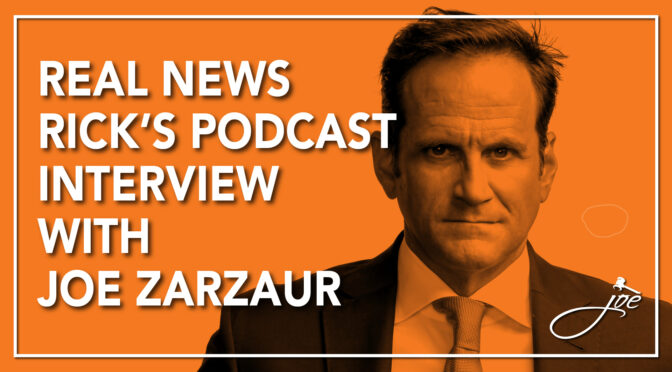 Attorney Joe Zarzaur joined journalist Rick Outzen to discuss how Joe discovered what he believes is a lack of oversight in the Santa Rosa County school district in the hiring of substitute teachers. A teacher that was banned from one Santa Rosa school was allowed to work at Gulf Breeze Elementary, where he was later convicted of molesting several girls.

RO:  You put out a video on YouTube on Friday and if anyone has a child at public schools, they should be concerned, particularly in Santa Rosa County. You uncovered what looks like that the school district may have not properly vetted its substitute teachers.

JZ: Yeah. First, I don’t like to litigate cases in the media, and I certainly don’t like to it on Facebook, but occasionally there is a case that you feel like rises to the level of importance from a public safety standpoint that you almost want to interrupt the litigation process and step aside, and just make it right.

JZ: So, I felt compelled to do that this last week because I had taken the deposition last Thursday on the human resource person at the Santa Rosa County school district and the corporate representative for the school district for purposes of Mr. Mack’s involvement, but this all dates back to a 2016 event that happened at Gulf Breeze Elementary School, where four children were abused by a substitute teacher in the same day. He ended up pleading guilty for lewd and lascivious behavior with minors. The parents that hired me, came to me, and we had done some investigation into this initially and found out that the Escambia County school board had banned this substitute teacher a year and a half prior.

How can somebody just banned for inappropriate touching, come over the bridge and get a job in Santa Rosa County and go free and then do the same thing to the kids in an elementary school?

I found out that a private entity, PESD (the name of the company is now Staff EZ), had been hired by the county in 2015 to basically handle all the substitutes hiring screening, and the HR for substitutes.

This incident happened after being banned for inappropriately touching students in Escambia County and then getting the job through P E S D as a substitute teacher in Santa Rosa County. I start the case against this private entity and out their questionable company to start with, having a tax lien to the tune of $10 million for not paying, but holding taxes for substitute teachers.

I did some discovery and find out that they did screen and interviewed him and a group of 30 other people. They just asked him what he did in the years prior to coming to apply there and they didn’t check references. They missed a course, Escambia County where he got banned.

So, they hired him, and they were basically saying that, well he’s an approved list. And I said, all right, let’s investigate this – the approved the list comes from the county. And then I realized the county is giving this private company, the approved list of substitute teachers. I ask the county and I get the list finally (after fighting for it) three weeks ago. I’m looking at it. The approved list is redacted except for the guy that I’m going after (Mr. Mack), which has a yellow box, and it says banned at Woodlawn Beach Middle School, which was not the school that he abused the children. (Gulf Breeze Elementary School is just down the road – in the same county).

RO: The other thing that stood out, you know is that, yeah, he had, he had already been banned from one elementary school and they let him in Gulf Breeze, but you also found out that you thought you had the public record and then found out there was a whole other file system out there that had the other information.

JZ: Well, that’s true. Last Thursday, I’m asking, they produced the list. This list has a yellow box that says this guy is not allowed to teach at this school. There are also 24 other teachers on that list who also have their banned from other schools that are still actively substituting in Santa Rosa County school.

That was my urgency to get on Facebook and say, you know, this is happening. I asked the corporate representative for the school district, is the basis of his why was he banned from Woodlawn Beach Middle School in 2011?

I asked for the personnel file request back in 2018, I was provided a bunch of certificates that says who the teacher is in W2 stuff and all that junk, but nothing suggests that he was banned from a school.

And she goes, ‘Well, I’ll pull the disciplinary file.’

She said, oh, well, you know, we don’t keep the disciplinary file with the personnel file. We take it out and put it in a separate file cabinet and unless you ask for it specifically, we don’t give it.

Mr. Mack pled guilty in 2016. So, I’m asking about 2011 and she was like, oh, let me read the letter. She read the letter – inappropriately, touching students at Woodlawn Beach Middle in 2011. From that school. How can somebody who’s banned from a middle school by the way, be allowed to teach in an elementary school for that matter?

RO: I mean, it is frightening that there is someone with disciplinary action involving inappropriately touching children allowed to move around the system and be able to keep a job and be around children.

JZ: There is no central database for that information, unless the teacher says, oh, by the way, I used to work in this county. If the teacher hadn’t been employed, I’m not smart enough to ask, well, what the heck did you do between this year and this year?

RO: Yeah, and inside the same school district. The other thing I’ve noticed in other stories that we’ve done is that school districts also can go after that teacher’s license and they, you know, they can take it up a whole other level.

When something like this happens it’s like a bar action or an action against the doctor or any sort of professional, you can register against their teaching certificate and that’s not happening out there.

Joe, thank you so much for coming on the show.

If you’ve been the victim of an accident, it’s important that you don’t make any rash decisions. Put yourself in the best possible position to receive the justice you deserve. It is also important to consult with a Florida Bar Certified Civil Trial Lawyer who has the knowledge and experience to help you. We know accidents can be stressful and want to make the process as easy as possible for you. Call Zarzaur Law, P.A. today at (855) Hire-Joe, or by requesting a free case review through our website.