Personal Injury & Back To School: Playground Concussions Are on the Rise 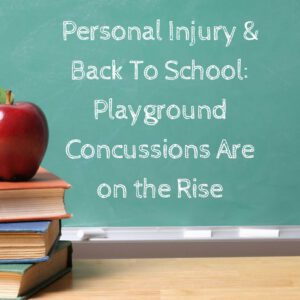 Back to School: Back To Injuries

By now most parents have heard about the danger of concussions in sports like football and hockey. But parents trying to keep their children safe from head injuries need to be concerned with more than contact sports. A new Centers for Disease Control and Prevention study found around 21,000 kids aged 14 and younger suffer traumatic brain injuries including concussions on playgrounds every year.

Researchers looked at playground injuries to kids 14 and under who were treated in the emergency room. From ages 5 to 9, most of the injuries were to young boys. Concussions accounted for 10-percent of the injuries.

The study also found that the rate of concussions was rising among children, from 23 out of 100,000 in 2005 to 48 out of 100,000 in 2013. While the CDC isn’t sure what’s causing the rise in traumatic brain injuries, it is recommending “improved adult supervision, methods to reduce child risk behavior, regular equipment maintenance, and improvements in playground surfaces and environments.” 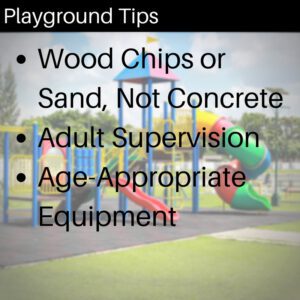 Playground equipment manufacturers have a duty to ensure their products are safe to play on, and companies can be strictly liable if a person is injured by their product. A piece of playground equipment could be improperly designed, poorly manufactured, or lack proper warnings, leading to dangerous or deadly accidents. The CDC study recommended that playgrounds use soft ground surfaces like wood chips or sand, rather than concrete.

Where a playground is located may also affect legal liability for injuries. If the playground is on school property or in a city park, you could have a premises liability claim against the school or municipality. But suing a government entity is can be more complicated and may require filing a notice of claim first, so that the school or city is on notice that an injury has occurred. (This gives the government entity an opportunity to accept and pay the claim before going to court.) If your claim is ignored or denied, you can then sue the entity in court.

Playground injuries can occur at public schools, private schools, daycares, city parks, and private homes. Most of these injuries are caused by unsafe behavior by children or by unsafe equipment. If your child was seriously injured while playing on a playground, you may want to learn more about the legal concepts of premises liability and negligent supervision of children, which might be utilized in a claim for injury compensation.

Schools and other operators of playgrounds have a duty to protect children from foreseeable dangers on the premises. To bring a suit to recover for a playground injury based on a premises liability theory, you must show that:

With facts such as these, the elements of a premises liability case would be met, and the school or owner/operator of the playground could be deemed negligent.

When someone accepts the responsibility of watching your child, that person could be liable for harm that comes to your child because of a lack of supervision. School teachers and staff have a heightened duty of care toward your child because they are acting in loco parentis, which is Latin for “in the place of parents,” at school. They must take reasonable steps to prevent foreseeable harm to students. The school must have an effective system of supervision in place to keep students safe. Other organizations and individuals that agree to watch your children also have a duty to act with reasonable care to avoid injury to your children.

To sue for negligent supervision, you need to show that:

One example of this type of claim is where children at school are let out to play at recess without any supervision and a fight erupts. If the fight escalates and a child is pushed off a climber and breaks an arm, the school could be sued for negligent supervision of the children. The school has the responsibility of monitoring the students. If a staff member had supervised recess and stopped the fight, this incident likely would not have occurred.