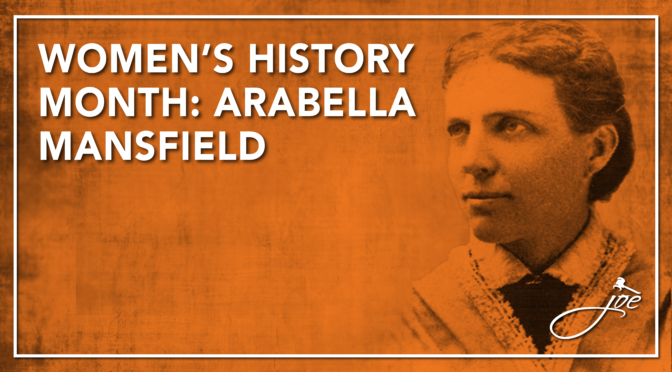 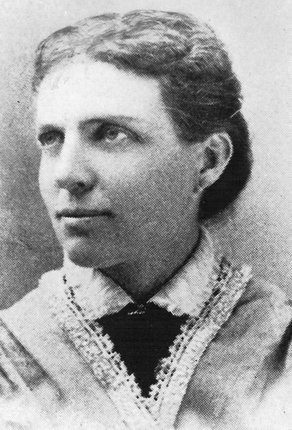 Arabella Mansfield (1846-1911) became America’s first woman lawyer when she was admitted to the Iowa bar in 1869. She was allowed to take the bar exam and passed with high scores, despite a state law restricting applicants to white males over the age of 21. Mansfield also became one of the first female college professors and administrators in the United States.

She was born Belle Aurelia Babb on May 23, 1846, on a family farm in Burlington, Iowa, the second child of Mary Moyer and Miles Babb. Her older brother Washington Irving Babb was Arabella’s lifelong friend. While she was still young, her father Miles Babb left for California and the Gold Rush. In 1852, he became superintendent of the Bay State Mining Company, but he died when a mine caved in on him the same year.

With many men leaving to fight in the Civil War, academic institutions were admitting more women students and teachers. Arabella graduated in 1866 as valedictorian (top-ranking student); her brother Washington was salutatorian (second highest) in the same class.

Arabella then taught political science, English, and history at Simpson College in Indianola, Iowa for a year, becoming one of the first female college professors. In 1868 she returned to Mount Pleasant and married her college sweetheart John Mansfield, a professor of natural history at Iowa Wesleyan College.

Breaking The Barrier – Women In Law

Arabella Mansfield then studied law for two years in her brother’s law office in Mount Pleasant to prepare for the bar exam, which was the practice at the time. At the time, Iowa law limited admittance to the bar to white males over the age of twenty-one, but Mansfield was allowed to take the exam in 1869 and passed with high marks. Mansfield was admitted to the Iowa State Bar, opening the way for other women in the legal profession.

Shortly thereafter, Iowa changed its statute and became the first state in the Union to allow women to practice law, with the Court ruling that women should not be denied the right to practice law in Iowa based solely on their gender.

However, Mansfield never practiced law but spent her professional life teaching. She was a professor of English at Iowa Wesleyan College, from which she also received an M.A. degree 1870 and an LL.B. law degree in 1872. She continued to teach there until 1876.

Arabella Mansfield sought equal opportunities for women in all aspects of U.S. society. She was active in the women’s suffrage movement, joined the executive committee of the National Woman Suffrage Association in fall 1869, and worked with Susan B. Anthony.

The following spring, she became president and chair of the first Iowa state-wide women’s suffrage convention. She was the group’s first secretary and campaigned for equal educational opportunities for women as well as voting rights.

In 1876 Mansfield and her husband moved to Greencastle, Indiana to join the faculty at DePauw University where they taught for the next eight years. After a two-year period devoted to caring for her husband, who had suffered a nervous breakdown and whom she ultimately had to place in an asylum, Mansfield resumed her career at DePauw in 1886, teaching at various times history, aesthetics, and music history.

Arabella Mansfield died on August 1, 1911 in Aurora, Illinois at age 65 – nine years before women obtained the right to vote.

Because of the courageous and intellectual strides of women like Arabella Mansfield, women today stand on a more level playing field. She was inducted into the Iowa Women’s Hall of Fame in 1980. In 2002 the Iowa Organization of Women Attorneys established the Arabella Mansfield Award to recognize outstanding women lawyers in Iowa.