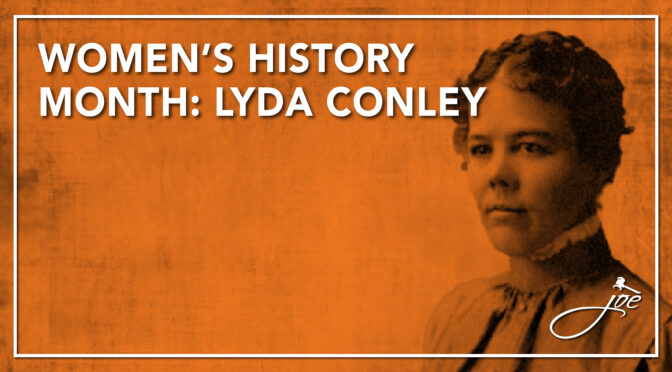 By: Emma Rothberg, NWHM Predoctoral Fellow in Gender Studies I 2020-2022

Standing before the Supreme Court, Eliza “Lyda” Burton Conley argued to protect her ancestral burial ground. Considered the Guardian of Heron Indian Cemetery, her appearance made her the third woman, and the first Native American, to argue a case in front of the Supreme Court. For her, this case was personal.

Eliza Burton Conley was born sometime between 1868 and 1869 to Eliza Burton Zane Conley, a member of the Wyandotte tribe and descendant of a chief, and Andrew Conley, an English farmer in Kansas. Conley was one of four sisters. The Wyandotte were sometimes controversially called “Huron,” hence the name of the cemetery. A very active and independent young woman, she and one of her sisters would row across the river every day to attend school at Park College. During her lifetime, she became a lawyer, was admitted to the Missouri Bar, trained as a telegraphic operator, taught at Spalding Business College in Kansas City, and taught Sunday School at her Methodist Episcopal Church. She did all of this before women had the right to vote in the United States.

Conley is most well known for her attempts to protect the Huron Indian Cemetery located in downtown Kansas City, Kansas. As Kansas City developed, the cemetery’s land became prime real estate. Conley— whose mother, sister, and hundreds of her Wyandotte tribesmen were buried in the cemetery—paid close attention to discussions around the land. Realizing the potential threats against the land, Conley entered the Kansas City School of Law in preparation to fight for its protection. She graduated as one of the only women in her class and was admitted to the Missouri Bar in 1902.  She was reportedly also admitted to the Kansas Bar in 1910.

In 1906, Congress approved legislation to sell the land and move the bodies buried there. As a lawyer, Conley filed a permanent injunction against the U.S. Secretary of the Interior and Indian Commissioners in U.S. District Court to prevent the sale. As a private citizen, Conley and one of her sisters, Helena, built a shack, known as “Fort Conley,” at the entrance to the cemetery, padlocked the gate, and hung a sign that warned against trespassers. As her lawsuit went through the courts, Conley and her sister guarded their family and ancestors’ graves day in and day out with a shotgun.

In a 1906 interview, Conley said, “I will go to Washington and personally defend” the cemetery. She continued, “no lawyer could plead for the grave of my mother as I could, no lawyer could have the heart interest in the case that I have.” When asked by the interviewer if she could win, Conley smiled and responded, “If I lose, then I will admit that the constitution of the United States is as Greek to me.”

When Conley appeared before the Supreme Court on January 14, 1910, she formally represented herself as the named plaintiff. She argued that the 1855 federal treaty with the Wyandotte prevented the U.S. from selling the land and that the descendants of those who signed the treaty had the right to enforce it. Despite her arguments, the Supreme Court argued the government had the right to sell the land. Conley and her sister were not discouraged, and continued guarding the cemetery.

While she lost in court, she won the longer battle to protect the cemetery. Her actions got the notice of Kansas state senator Charles Curtis. In 1913, Curtis wrote and passed a law protecting the cemetery from future development. Yet the threat of development was still there and Conley kept up the fight. She tried to get an injunction against the city in 1918, was arrested several times for interfering with city officials who she felt were disrespecting the graves, and in the 1930s spent 10 days in jail on a trespass charge for protecting the cemetery. In her later life, Conley and her sister continued to spend most of their time around the cemetery, near the graves of their sister and mother.

Conley was murdered during a robbery in 1946. She is buried in the Huron Indian Cemetery next to her sister, Helena, and 400-600 other bodies. Many of the graves remain unmarked. Others, inspired by her determination to save the cemetery, kept up the fight. In 1971, the Huron Indian Cemetery was added to the National Register of Historic Places. In 2017, the cemetery was designated a National Historic Landmark, officially preventing any development from happening on the site.