Press Release: Judge Adheres To Rules Of Judicial Ethics And Is Unable To Respond Directly To Attacks From Presidential Candidate.

DALLAS (June 6, 2016) — The American Board of Trial Advocates (ABOTA) is an organization dedicated to the preservation of a fair and impartial judiciary and the right to trial by jury. Recently, we have seen highly publicized attacks by presidential candidate Donald J. Trump, who is a litigant in a case pending before Judge Gonzalo Curiel in Federal District Court in California.

These attacks include charges that Judge Curiel, who was born in Indiana, cannot be fair because of his Mexican heritage. Mr. Trump also described the judge as a “hater” because he issued multiple rulings against him.

Mr. Trump is represented by highly capable lawyers who can invoke a legal process if Mr. Trump truly believes any judge is acting unfairly. The legal mechanism of recusal is available to all litigants if either a conflict exists or if there is a question of impartiality. The fact that his counsel have not elected to ask for the recusal of Judge Curiel demonstrates the political nature of Mr. Trump’s public comments.

The judicial code of conduct prevents the judge from responding to such attacks, so Judge Curiel’s silence on this matter demonstrates that he is following the rules. ABOTA has a long history of responding to unfair attacks on judges who cannot respond for themselves and believes that political and special interest interference in the judicial system is contrary to the American concept of justice. 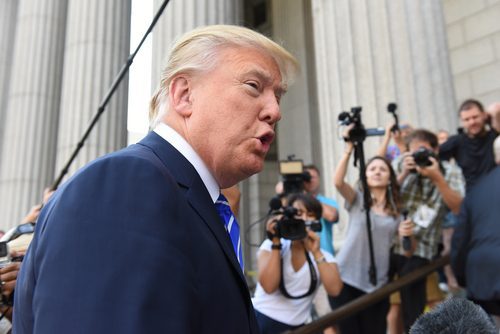 ABOTA views these attacks on the federal judge to be a threat to the independence of the judiciary, which in turn is a threat to the rule of law. An independent, fair and impartial judiciary is the bulwark against the whims, wishes and demands of the government and other special interests.

When attacks on a judge’s impartiality because of his ethnic background come from a litigant who is a candidate for the highest office in the land, such attacks unfairly misrepresent to the broader public the truly independent role of judges. One could view these highly publicized attacks by an individual who may become the President of the United States as an attempt to influence the judge in his rulings and make the judge bend to his will due to the candidate’s position of influence.

ABOTA stands for respect of our judicial system and the right of trial by jury as we believe such principles are fundamental to preserving our democracy. Our judicial system cannot function without the lawyers, the litigants and the courts treating each other with civility. We have a very diverse country made up of women and men from every walk of life, from every ethnic group and from many different points of view.

We have a federal judiciary selected from many of the best and brightest minds in the law and made up of individuals from many different cultural backgrounds who are overwhelmingly dedicated to being fair and impartial. It is a system upon which the public can have confidence in and accept the outcome of each case.

This should not be considered an endorsement for president of one candidate or another.ABOTA does not endorse political candidates nor does ABOTA become involved in political races. This commentary is limited to what ABOTA considers unfair attacks on the judiciary.

Charles H. Baumberger is from Miami and is the national president of the American Board of Trial Advocates, an invitation only organization dedicated to defending the American civil justice system and elevating the standards of integrity, honor and courtesy in the legal profession. ABOTA members are represented equally between both plaintiff and defense lawyers and includes state and federal judges.